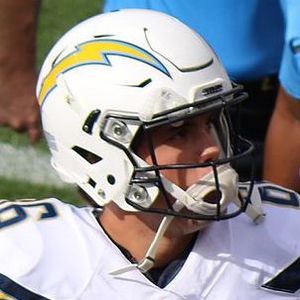 American football player known for his time with the Arkansas Razorbacks. In 2015, his junior year, he won the John Mackey Award as the nation's top tight end. He was named a Consensus All-American that same year. At the end of the season, he forfeited his last year of college eligibility to enter the NFL Draft.

He attended Pulaski High School, where he established himself as one of the top players at his position. He was named a Parade All-American as a senior in high school.

In a 2015 game against Ole Miss, he helped save the game by throwing a desperation lateral on 4th-and-25 in overtime. The ball found a teammate, who ran for the unlikely first down, allowing the Razorbacks to ultimately win the game.

He was born to Mark and Jenny Henry in Little Rock, AR.

He played for coach Bret Bielema while at Arkansas.

Hunter Henry Is A Member Of