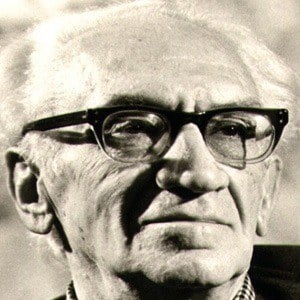 Controversial psychologist and scholar known for his reinterpretations of historical events. His book, Worlds in Collision, was published in 1950 and was a bestseller in the US.

He graduated with a gold medal from Medvednikov Gymnasium in Moscow in 1913.

He used ancient works of literature, including the Old Testament, to theorize that Earth had endured catastrophic close contacts with planets like Venus and Mars in the distant past.

His parents were Shimon Velikovsky and Beila Grodensky.

Immanuel Velikovsky Is A Member Of