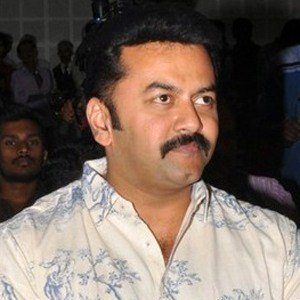 Malayalam film star risen to fame starring in films like Amen, Amar Akbar Anthony, and Ee Adutha Kaalath. He is also known for his award-winning role in Amen, winning Outstanding Performance of the Year at the 2013 Asiavision Awards.

He earned a bachelor's degree in computer science engineering at Rajaas Engineering College before working as a trainee at a software company.

He has lent his voice to numerous songs on soundtracks for his films, including "Premamennaal" which appeared in Amar Akbar Anthony.

His parents, Sukumaran and Mallika, were both actors, as is his brother, Prithviraj Sukumaran. He and his wife, fellow actress Poornima Indrajith, have two daughters, Praarthana and Nakshatra.

Fahadh Faasil appeared with him in the acclaimed romantic comedy film Amen.

Indrajith Sukumaran Is A Member Of