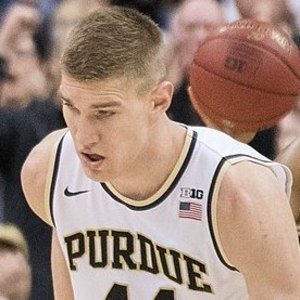 Center who rose to fame for his career as a member of the Purdue Boilermakers. He was a four-year contributor between 2015-2018, and finished on the third-team All Big Ten team as a senior in 2018.

He was a four star recruit and top 100 player in the country following his high school career at Hokes Buff High School. He originally committed to Wake Forest before switching to Purdue.

He was named to the 2018 pre-season watchlist for the NCAA's Kareem Abdul-Jabbar Award. He represented the US national team at the 2017 Summer Universiade.

His parents' names are Rachel and Danny.

He played as a back-up to AJ Hammons during his first two years at Purdue.

Isaac Haas Is A Member Of