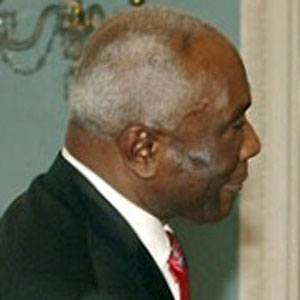 A two-term Haitian Prime Minister, he initially took office in 1999 and, after a two-year-long first term, again led his country from 2006-2008. He was forced to resign in 2008 as a result of a severe Haitian economic crisis that involved widespread food riots.

After studying agricultural engineering at the State University of Haiti, he earned a master's degree in food science from Canada's Université Laval. In the late 1980s, he founded Haiti's University of Quisqueya.

During the administration of Haitian President René Préval, Alexis served as Haitian Minister of Culture, Education, Youth, and Interior.

He was born and raised in Gonaïves, Haiti. He later married and subsequently became a father of five children.

He and Michel Martelly both became political leaders in Haiti; Martelly took office in 2011 as President of Haiti.

Jacques-edouard Alexis Is A Member Of