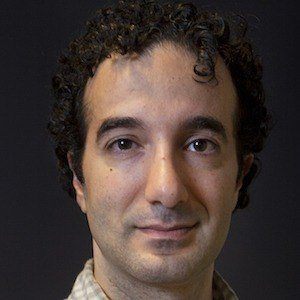 Radio personality most well known as the founder and co-host of the syndicated program RadioLab. He has also produced a number of programs for National Public Radio and PRI.

In 1995, he graduated from Oberlin College with a degree in creative writing and music composition.

Prior to beginning his career in radio, he composed film scores.

He was raised in Tennessee by his father, Naji, a doctor, and his mother, a scientist. He married his college sweetheart, Karla Murthy, in 2007 and the pair have two children.

Like scientist Carl Woese, he became a MacArthur Fellow in 2011.

Jad Abumrad Is A Member Of