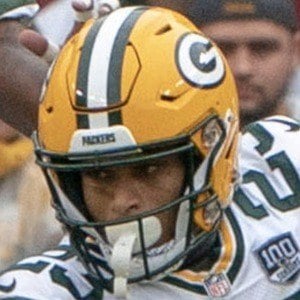 Cornerback who rose to fame for his college career playing for the Louisville Cardinals. He finished the 2016-2017 season on the All-ACC second team, and declared for the NFL Draft following his 2017-2018 junior season.

He was drafted at #18 during the 2018 NFL Draft by the Green Bay Packers. He then went viral for celebrating the Baltimore Ravens selecting his former Louisville teammate Lamar Jackson during the draft's 1st round.

He was originally born and raised in Charlotte, South Carolina.

He was taken during the 1st round of the 2018 NFL Draft alongside Baker Mayfield.

Jaire Alexander Is A Member Of