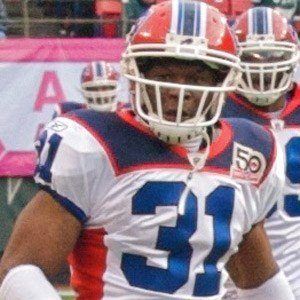 Safety who made his NFL debut in 2009 for the Buffalo Bills, and made both the All-Pro and Pro Bowl teams his rookie season; First Team All-Pac 10 his junior year at the University of Oregon; selected 42nd overall in the 2009 NFL Draft.

As a rookie he had three consecutive games - against the New York Jets, Carolina Panthers, and Houston Texans - in which he recorded two interceptions.

He was born to Gill and Marilyn Byrd; his father also played in the NFL.

As a rookie, he, Charles Woodson, Asante Samuel, and Darren Sharper all recorded 9 interceptions, tying for first in the NFL.

Jairus Byrd Is A Member Of