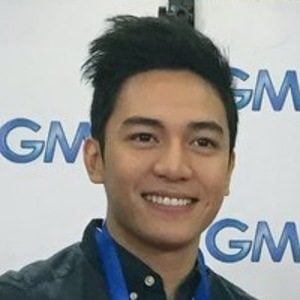 Filipino pop singer and member of boy band 3LOGY. He has also appeared in numerous television series, including Meant to Be, The Half Sisters, Maynila, PopPot, and the soap opera With A Smile.

He graduated from HRM. He got his start as a co-host on the Filipino late night show Walang Tulugan with the Master Showman.

He became an exclusive artist of GMA Network and has also appeared in various programs on the popular network.

He was born John Rommel Roberto. He has a younger sister named Shaira, who's better known under her stage name Sanya Lopez. He has been in a relationship with actress Barbie Forteza.

He became popular after appearing as Ambo in the television drama The Half Sisters alongside Barbie Forteza.

Jak Roberto Is A Member Of