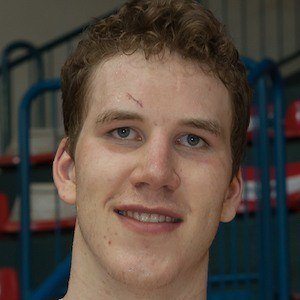 7-foot Austrian center who spent two years at the University of Utah, helping the team reach the sweet 16 in the 2015 NCAA Tournament. He was selected 9th overall in the 2016 NBA Draft by the Toronto Raptors.

He had a standout 2013-14 season with theArkadia Traiskirchen Lions in the Austrian Bundesliga, averaging 12.7 points, 7.7 rebounds and 2.3 blocks per game.

In his first game at Utah, he scored 18 points and grabbed 10 boards.

His parents both played volleyball for the Austrian national team. He has a sister named Miriam.

He was teammates with star point guard Delon Wright at Utah.

Jakob Poeltl Is A Member Of