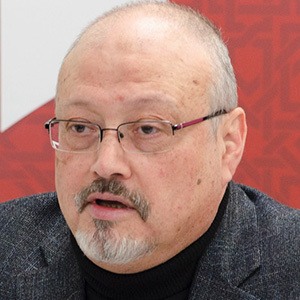 Saudi Arabian journalist and former editor-in-chief of Al-Arab News Channel who is also known for his work with the Al Watan newspaper. After writing articles critical of the Saudi Arabian government and the Crown Prince in The Washington Post, he was killed in the Saudi Arabian consulate in Istanbul on October 2, 2018.

He earned his bachelors degree in business administration from Indiana State University in 1982. He began his career as a manager of Tihama Bookstores and later became a correspondent for the Saudi Gazette. He became editor in chief of Al Madina in 1991.

In 2018, he established a new political party called Democracy for the Arab World Now which positioned him as a threat to Crown Prince Mohammed.

He is the first cousin of Dodi Fayed who was dating Princess Diana when they were killed in Paris.

He is known for having interviewed Osama bin Laden in Tora Bora and Sudan in 1995 about the jihad against the Soviets.

Jamal Khashoggi Is A Member Of