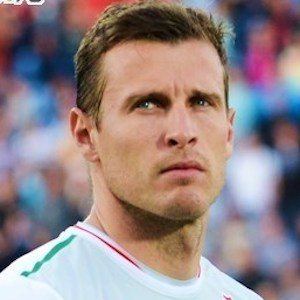 Centre back who is best known for his many years as a member of FC Lokomotiv Moscow, with whom he won the Russian Cup title in 2015. He also won Slovak Superliga and Slovak Up titles with FC Petržalka Akadémia early in his career.

He made his senior debut with Dunajská Streda in 2001.

He was named as the top player in the Russian Professional Football League while playing for FC Saturn Ramenskoye in 2007.

He has dated Magdaléna Šebestová, with whom he has a daughter named Nina.

He was teammates with Vladimir Weiss on the Slovak national team at the 2010 FIFA World Cup.

Jan Durica Is A Member Of