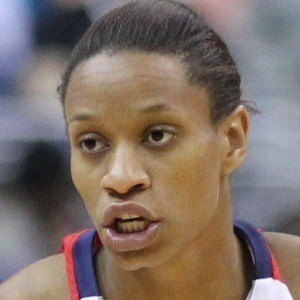 Guard who is widely known for her tenure playing in the WNBA. She was selected in the 1st round at #12 overall by the Seattle Storm in 2011 WNBA Draft. She was soon after traded to the Washington Mystics, with whom she spent two seasons.

She played collegiate basketball at Duke University from 2007 to 2011. She averaged 12.5 points and 3 assists per game during her career there.

She led the 2007 Women's U-19 national team to a gold medal at the FIBA U19 World Championship.

She was born and raised in Fairfax, Virginia.

She has played alongside Kelly Faris as a fellow member of the WNBA's Connecticut Sun.

Jasmine Thomas Is A Member Of