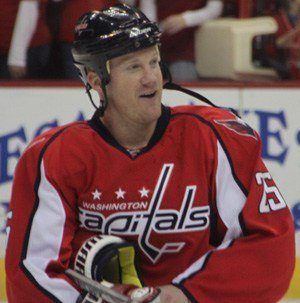 NHL left wing who debuted with the Edmonton Oilers during the 2000-01 season. He played for the Columbus Blue Jackets from 2005 to 2009 before a trade sent him to the Washington Capitals.

He began his junior hockey career with the Medicine Hat Tigers of the Western Hockey League in 1996. He was selected 121st overall in the 1997 NHL Draft by the Oilers.

He was born in Edmonton, Alberta.

He played alongside right winger Jakub Voracek for two seasons on the Blue Jackets.

Jason Chimera Is A Member Of