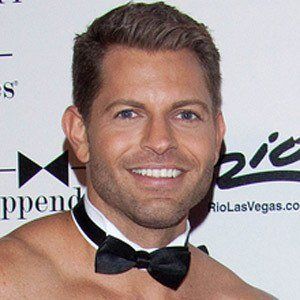 Former male revue star turned reality contestant who gained fame in 2012 competing on the 21st season of The Amazing Race. He would go on to become a correspondent for Celebrity Page and The Talk.

He and best friend James Davis began competing on The Amazing Race together after working at Chippendales together in Las Vegas.

In 2016, he joined the cast of the film Chocolate City: Vegas as Adonis.

He has a sister named Reketa. He's been engaged to Jonathan Bennett.

On The Amazing Race, he competed against former White Lion and Megadeath bassist James Lomenzo.

Jaymes Vaughan Is A Member Of