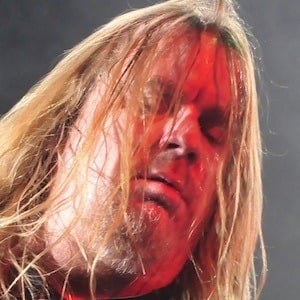 Lead guitarist of the thrash metal band Slayer who wrote "Raining Blood" and "War Ensemble," among other songs.

Conversations about the war with his veteran father became an inspiration and the subject for many of his future songs.

He wrote what is perhaps the best-known thrash metal song, "Angel of Death."

He was married to Kathryn Hanneman from 1997 until his death in 2013. His brother is also a thrash metal musician.

Slayer got started when Hanneman and bandmate Kerry King found out that they both liked Scott Travis and Judas Priest.

Jeff Hanneman Is A Member Of