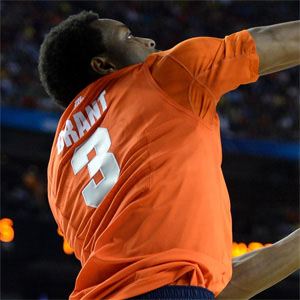 Forward who made his college debut in 2012 for Syracuse. He is the son of former NBA player Harvey Grant.

He played high school basketball at DeMatha High School, where ESPN ranked him as the 11th best power forward recruit.

As a freshman, he averaged more than 17.0 minutes per game.

His older brother Jerian starred as a guard for Notre Dame.

His uncle, Horace Grant, played in the NBA.

Jerami Grant Is A Member Of