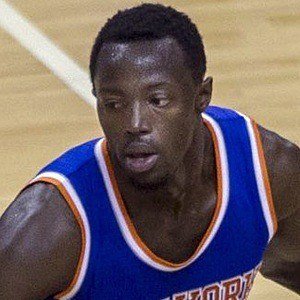 6'5" guard who played four years of college basketball at Notre Dame, earning Consensus First-team All-American honors while leading the Fighting Irish to the Elite Eight in 2015. He was selected 19th overall in the 2015 NBA Draft by the Washington Wizards, then promptly traded to the New York Knicks.

He led DeMatha Catholic High School to an 88-18 record during his three years at the school. He was also named to the King James Classic All-Tournament Team and was MVP of the Nike Super Showcase in high school.

He was named ACC Tournament MVP after helping lead Notre Dame to a conference tourney championship with wins over Duke and North Carolina.

His uncle is four-time NBA champion . His father was picked in the first round of the 1988 NBA Draft and his brother was a second round NBA draft pick in 2014.

His Notre Dame team was knocked out of the 2015 NCAA Tournament by Karl-Anthony Towns and Kentucky in a classic Elite Eight game.

Jerian Grant Is A Member Of