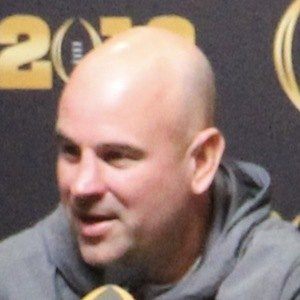 Head coach for the University of Tennessee Volunteers who was hired in the midst of the University of Alabama Crimson Tide vying for a 2017-2018 national championship where he served as defensive coordinator under Nick Saban. He finished the season with the Tide where he had previously won a 2010 and 2012 national championship as the defensive backs coach.

He was recruited to be a quarterback at Middle Tennessee State, but was switched to defensive during his freshman year. He then transferred to the University of Alabama.

He has sons named Ridge, Jayse and Flynt. Only Ridge is the son of both him and wife Casey East. He was born to Dale and Melissa Pruit. His father was a long-time high school head coach.

He was hired by Tennessee after they fired Butch Jones.

Jeremy Pruitt Is A Member Of