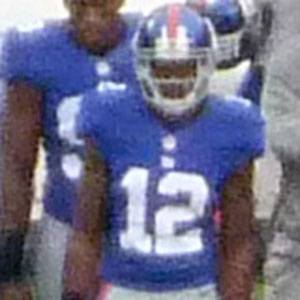 Punt returner and wide receiver was drafted 83rd overall by the Giants in 2011. He had 29 receptions, 329 yards and 2 touchdowns during the 2013 season.

He earned a scholarship offer to Troy after impressing scouts at Eufaula High School.

He was a three-time All-Sun Belt selection from 2008 to 2010 at Troy University.

He was raised with three sisters named Tashayla, Rasheema, and Shiekra. His parents are Stanley and Virginia.

He is in the company of All-Pro Demarcus Ware as one of the few players from Troy University to reach the NFL.

Jerrel Jernigan Is A Member Of