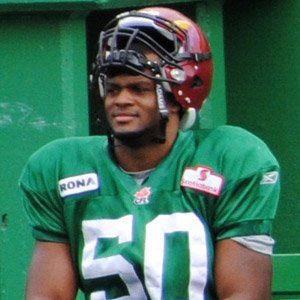 Linebacker who has played in both the CFL and NFL, most notably for the Indianapolis Colts.

He played college football at division 3 University of Mary Hardin-Baylor.

After going undrafted, he signed with the Tennessee Titans in 2008, but didn't make his NFL debut until 2012 with the Colts.

In his first NFL game, he intercepted a pass by Jay Cutler, and returned it for a touchdown.

Jerrell Freeman Is A Member Of