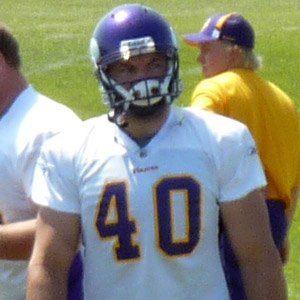 Former NFL fullback and tight end who played for the Minnesota Vikings from 1999 to 2011. He finished his career with the second-most starts by a tight end in Vikings history with 119.

He was a basketball player at Carrington High School.

He won the USA Today All-Joe Team award for under-appreciated players two consecutive years in 2007 and 2008.

He has children named Carter and Cayden with his wife Christa.

He was longtime teammates with star wide receiver Randy Moss as a member of the Minnesota Vikings.

Jim Kleinsasser Is A Member Of