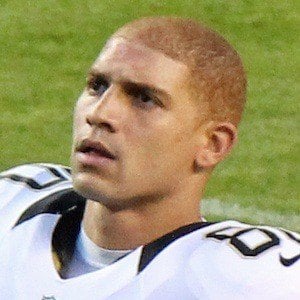 Pro-bowl tight end who was one of the top offensive weapons for quarterback Drew Brees on the New Orleans Saints from 2010 to 2014. Prior to the 2015 NFL season, he was traded to the Seattle Seahawks.

In 2011, he broke the NFL record for receiving yards by a tight end in a season. However, Rob Gronkowski then broke his record on the same day.

His mother put him in a group home when he was only 11 years old. After several years of abuse at the hands of older children in the home, he was adopted by a youth counselor in high school.

After catching passes from Brees, he became the starting tight end on the Seahawks alongside quarterback Russell Wilson.

Jimmy Graham Is A Member Of