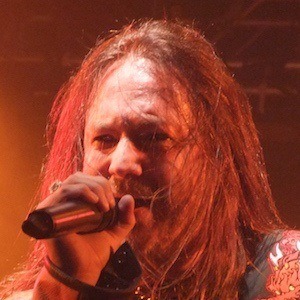 Most well known as the lead singer of the power metal band HammerFall. He has also been a member of the bands Lost Horizon, Warlord, and Mrs Hippie. In 2004, he launched his solo career by releasing his debut album Beyond the Gates. He would later followup with Nu kan mörkret falla in 2013.

He attended the Musician Institute in Hollywood, California. He'd previously spent his high school years as a competitive swimmer.

In 2008, he joined a choir that competed on the television show Körslaget. His team went on to win the competition in May of that same year.

He moved to Gothenburg with his mother after his parents separated. He has one sister. His partner's name is Wiktoria Lundqwist.

He is joined in HammerFall by Oscar Dronjak, Pontus Norgren, Fredrik Larsson, and David Wallin.

Joacim Cans Is A Member Of