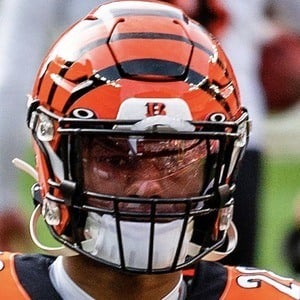 Football player best known as a running back for the University of Oklahoma Sooners. He was drafted in the second round by the Cincinnati Bengals in the 2017 NFL draft.

While attending high school, he played both basketball and football and was a three year starter for his football team.

He played in the 2015-16 Orange Bowl with the Sooners. He was ranked as a five star recruit and the No. 1 running back in the nation by Rivals.com in 2014.

He was born to Alise and John Mixon in Oakley, California.

He was coached by Bob Stoops while playing as a member of the Oklahoma Sooners.

Joe Mixon Is A Member Of