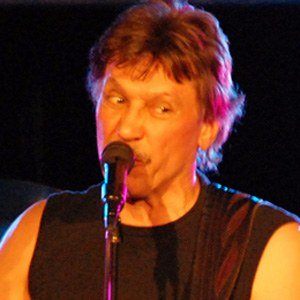 Frontman of the 1960s rock group Steppenwolf who performed hits including "Born to Be Wild" and "Magic Carpet Ride."

He joined Steppenwolf when the band was still The Sparrows in 1965, going with the group from a moderate success in Canada to heavy metal pioneers in the U.S.

He suffered from sensitivity to light, forcing him to wear sunglasses nearly all the time, even during concerts.

His mother, holding his infant self in her hands, fled from the Soviet-occupied section of Germany into the British zone.

Bruce Palmer was another early member of Steppenwolf, though he left before the group changed their name.

John Kay Is A Member Of