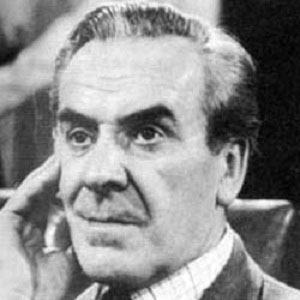 Famous during the 1970s for playing Arthur Wilson on the BBC's "Dad's Army," this British screen actor also played character roles in films such as "The Punch and Judy Man" and "The Rebel."

After training at the Fay Compton Studio of Dramatic Art, he began his stage acting career, the culmination of which was perhaps a performance with Alec Guinness in a John Gielgud-directed staging of 'Hamlet.'

He received a 1971 British Academy of Film and Television Arts (BAFTA) Award for his starring role in a television special titled "Traitor."

His marriage to June Melville lasted from 1940 until 1949. His second marriage, to actress Hattie Jacques, began in late 1949 and resulted in sons named Kim and Robin; his third marriage, to Joan Malin, began in 1966.

His third wife's affair with comedian Tony Hancock was the subject of the 2008 biopic "Hancock and Joan." His second wife's infidelities with her personal driver, John Schofield, inspired another film, "Hattie."

John Le Mesurier Is A Member Of