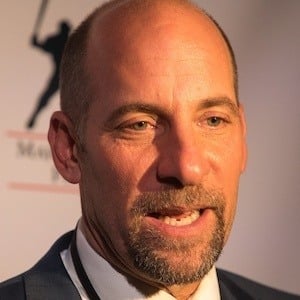 8-time MLB All-Star and longtime Atlanta Brave who excelled as both a starting and relief pitcher. He retired with a career ERA of 3.33 to go along with 3,084 strikeouts and 213 wins. In 2015, he was inducted into the Baseball Hall of Fame.

He was an All-State basketball player at Waverly High School.

Tiger Woods called him the best non-PGA golfer he ever played with.

He had four children in a seventeen-year marriage with Dyan Struble.

He teamed up with close friend and comedian Jeff Foxworthy to put on an event benefiting the John Smoltz Foundation.

John Smoltz Is A Member Of