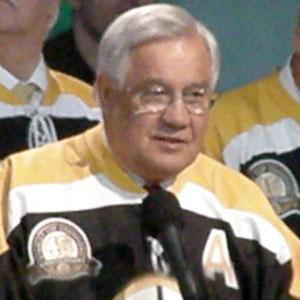 Ukrainian-Canadian Hall of Fame left winger who spent the majority of his career, 1955-1978, with the Boston Bruins.

He began with the Detroit Red Wings and played two undistinguished years before being traded in a remarkably lopsided deal for legendary goalie Terry Sawchuk.

He retired the fourth-leading scorer in NHL history and with the third-most games played.

His parents, Sam and Perl Bucyk, were Ukrainian immigrants.

Although he often played in Bobby Hull's shadow, his career numbers easily rival Hull's own.

Johnny Bucyk Is A Member Of