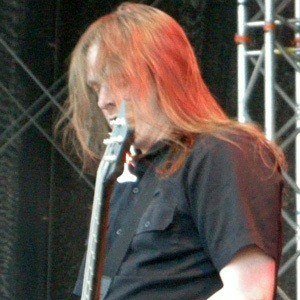 Swedish metal bassist most famous for being a member of the melodic death metal acts The Haunted and At the Gates. He has also had stints in bands like Demolition, Terror and Infestation.

He grew up attending concerts from bands like Morbid Angel as a teenager.

He began working as an accountant when The Haunted fell on hard financial times.

His twin brother Anders Björler has played guitar for both The Haunted and At the Gates.

He has shared the stage with drummer Adrian Erlandsson as a member of At the Gates.

Jonas Björler Is A Member Of