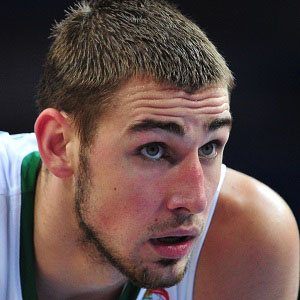 Lithuanian NBA Center who was drafted 5th overall by the Toronto Raptors in 2011.

He began playing basketball professionaly in 2008 when he was just 16 years old.

He played for the Lithuanian national team in the 2008 FIBA Europe Under-16 Championship, where his team took home Gold and he won the MVP Award.

He was raised mostly by his mother Danute, who never married his father Jonas Vilkas. He married Egle Acaite in 2014; they have two children together.

He was drafted 4 picks behind All-Star point guard Kyrie Irving, the first overall pick in 2011.

Jonas Valanciunas Is A Member Of