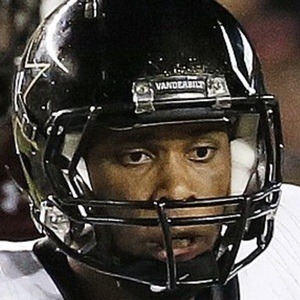 Wide receiver who was selected 42nd overall in the 2014 NFL Draft by the Philadelphia Eagles. He spent the first three years of his NFL career in Philadelphia before a 2017 trade sent him to the Buffalo Bills.

He played his high school ball at Madison Academy in Alabama.

He was a First-Team All-American in 2013 for the Vanderbilt Commodores as well as a First-team All-SEC selection in both 2012 and 2013. He won the 2013 CFPA Elite Wide Receiver Trophy.

He married soccer player Cheyna Matthews in 2018. He and Cheyna had their first child together in 2018. He is a distant cousin of Hall of Fame wide receiver Jerry Rice.

He became teammates with fellow wide receiver Jeremy Maclin on the Eagles in 2014.

Jordan Matthews Is A Member Of