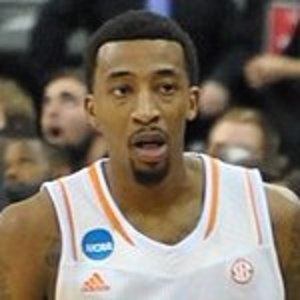 Second round draft selection of the San Antonio Spurs who became an NBA Champion as a role player for the Cleveland Cavaliers in 2016. He was traded to the 76ers on draft night and would become more of a D-League player early in his career.

He played college ball for the University of Tennessee where he was a two-time first-team All-SEC selection. He graduated from the school with a degree in sociology/criminal justice.

Though drafted by the Spurs and traded to the 76ers that night, he made his NBA debut with the Phoenix Suns in 2015-2016.

His parents are Cornelius and Paulette McRae.

He was a teammate of Josh Richardson at the University of Tennessee.

Jordan McRae Is A Member Of