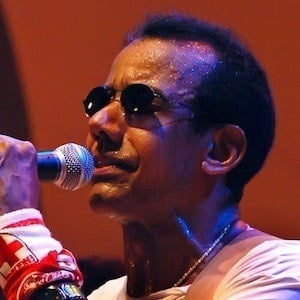 Musician who has become known for fusing samba, funk, rock, and bossa nova styles with his own satirical humor. Some of his most famous singles over his 5 decade long career include "Chove Chuva," "Mas Que Nada," and "Ive Brussel." His music has since been covered by countless popular artists from Miriam Makeba to Sergio Mendes.

He got his first pandeiro at thirteen and two years later he began singing in a local church choir. By eighteen he'd begun performing at parties and in nightclubs.

In 1975, he and Gilberto Gil released the collaborative album Gil e Jorge.

His mother is of Ethiopian descent. His mother bought him his first guitar. He has two sons, Gabriel and Tomaso Menezes.

In 2002, he contributed to the compilation album Red Hot + Riot which paid tribute to Fela Kuti and which raised money for AIDS awareness and research.

Jorge Ben Jor Is A Member Of