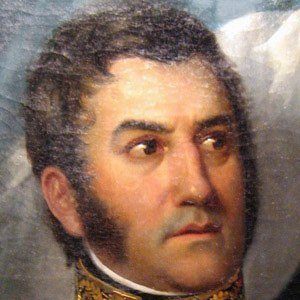 An Argentine Military Commander who ruled over all of southern South America after claiming independence from the Spanish Empire in 1821. He is considered a national hero in Peru and Argentina.

In 1808 he began involvement in the movement towards independence from Spain after the Peninsular War.

He helped establish the Army of the Andes, in Cuyo Province, Argentina to help win independence from Spain.

He married a gentry woman named Maria de los Remedios de Escalada in 1812 and they had a daughter together named Merecedes Tomasa San Martín y Escalada in 1816.

He is second only to Simón Bolívar in importance to the South American Revolution.

José de San Martín Is A Member Of