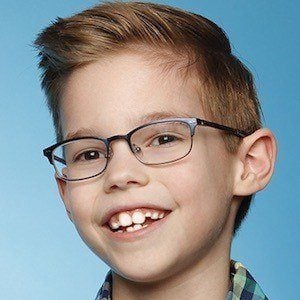 YouTube personality who is known for having co-created The Happy Family Show channel with his siblings. They gained renown for posting their comedic series involving Barbie dolls. The channel has more than 470,000 subscribers.

His first appearance on YouTube was when he was 5 years old. They posted the first episodes of The Happy Family Show on their mother's channel, and officially launched the HappyFamilyShow channel on January 12, 2012.

He starred in unboxing videos for Dreamworks Animation's YouTube channel and has a personal channel with gaming videos and photoshop tutorials.

He created The Happy Family Show channel alongside his older sister Christine and older brother Kevin. They were all homeschooled by their parents who encouraged them to use the extra time to pursue their creative passions.

Josh and his siblings are close friends of pop singer Jon Klaasen, whom they met through mutual friends.

Josh Jones Is A Member Of