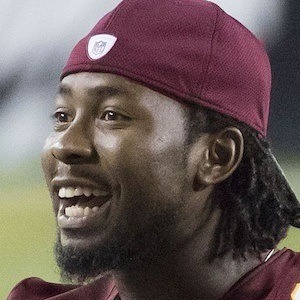 Star cornerback who was a fifth round draft pick of the Carolina Panthers in 2012. He had his breakout season in 2015, anchoring one of the NFL's top defenses while helping lead the Panthers to Super Bowl 50. He signed a $75 million contract with the Washington Football Team in 2016.

He was a top cornerback prospect after playing for Greenwood High School.

He played college football at Coastal Carolina University, where he was honored as a First-team All-Big South selection in three consecutive years from 2009 to 2011.

His parents are Roy and Sandra Norman. He has a brother named Marrio.

He and star linebacker Luke Kuechly became two of the cornerstones of a vaunted Carolina defense.

Josh Norman Is A Member Of