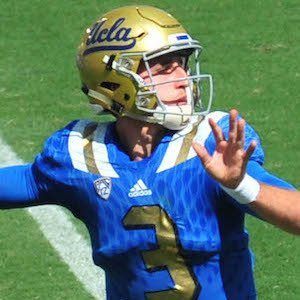 Quarterback who was selected 10th overall in the 2018 NFL Draft by the Arizona Cardinals after three years of college football at UCLA.

He was a top-10 ranked tennis player as a junior. He switched focus from tennis to football just before high school.

His senior year at St. John Bosco High School, he was named Los Angeles Times Player of the Year, throwing for 3,186 yards, 29 touchdowns and just 4 interceptions. Over his high school career, he threw for 11,175 yards and 90 touchdowns.

He was born and raised in Bellflower, California.

He commit to UCLA to succumb former quarterback Brett Hundley, who entered the NFL in 2015.

Josh Rosen Is A Member Of