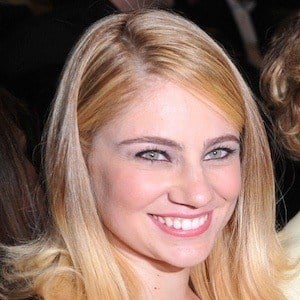 Telenovela star most well known for her leading role in the Rede Bandeirantes series Dance, Dance, Dance. Some of her other recurring television roles include spots in Malhação, The Prophet, and Once in a Blue Moon.

Her entertainment career began in 1990 as a stage assistant on the children's show Xou da Xuxa.

In 2009, she brought to life First Lady of Brazil, Marisa Letícia Lula da Silva, in the film Lula, the Son of Brazil.

She and her siblings, Rui Fernando and Jovana, were born to Rui and Riva Baroni. She married Eduardo Moreira in 2013 and they have a daughter, Maria Eduarda Moreira.

In 2015, she appeared in Cúmplices de um Resgate alongside Larissa Manoela.

Juliana Baroni Is A Member Of