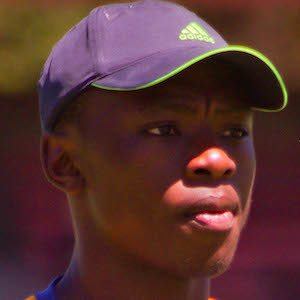 South African bowler known for representing his country at the Test and One Day International levels, as well as his domestic play with Lions.

He made his first-class debut in 2013, appearing for Gauteng at the end of that year.

At the start of 2016, he became the youngest South African to take ten wickets in a single Test match. He took a hat-trick in his ODI debut.

He grew up in Johannesburg, South Africa and is also known as KG.

He and Dale Steyn have played together on South Africa's national team.

Kagiso Rabada Is A Member Of