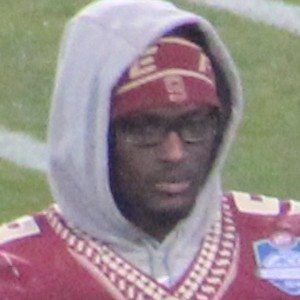 Running back who was selected in the fifth round of the 2015 NFL Draft by the Buffalo Bills. He played his college football for the Florida State Seminoles.

As a safety and running back for Ridge Community High School, he was rated a five-star recruit by Rivals.com

During high school, outside of being a star football player, he was also a talented track star.

His brother, Vince Williams, played for the Florida State Seminoles and later went on to play for the NFL's Pittsburgh Steelers. He has three children named Karlos Jr., Kiley, and Kobi.

He was coached by Rex Ryan as a member of the Buffalo Bills.

Karlos Williams Is A Member Of