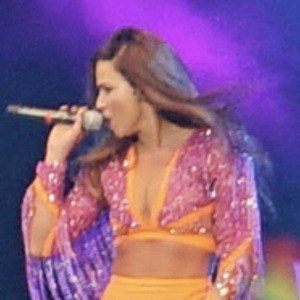 Greek former model and singer who represented Greece in the Miss World pageant and was featured in magazines like FHM and STATUS. After moving on from modeling, she began pursuing a music career, releasing singles like "Psila Takounia."

She won the Miss Hellas title at the Miss Star Hellas pageant in 2005.

She has worked as a children's swimming instructor at the TEI of Larissa in Larissa.

She was born in Thessaloniki, Greece.

She performed the song "Break Me in the Dark" with Nikos Ganos at the MAD Video Music Awards.

Katerina Stikoudi Is A Member Of