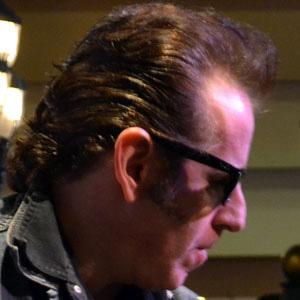 Bassist whose career has spanned more than four decades with bands like Dust and Blue Oyster Cult, as well as artists like Dana Fuchs.

At the age of twenty, he got an audition with Jimmy Lovine, who was the producer for Flame. Lovine got Aaronson into the studio soon after that to record several demos.

A longtime fan of the Rolling Stones, Aaronson got to perform with Ronnie Wood and Keith Richards on the Stones' Dirty Work album.

He grew up in Brooklyn, New York in a large Italian family.

Going strong well into the 2010s, he performed with the New York Dolls and toured in 2011 in support of Mick Mars and Motley Crue.

Kenny Aaronson Is A Member Of