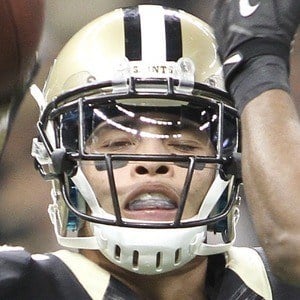 Big play wide receiver who was drafted in the fifth round by the New Orleans Saints in 2013. He ran a 4.32 40-yard dash at the NFL combine and his blazing speed allows for big play ability. In 2015, he was traded to the Miami Dolphins.

He played his college ball at the University of Oklahoma and had a fantastic junior year racking up 1,500 yards and 17 touchdowns.

In his rookie NFL season he averaged roughly 20 yards per reception.

He was born in Eden Prairie, Minnesota. Both his father Ken Stills and his uncle Gary Stills played in the NFL.

He caught balls thrown by Drew Brees as a member of the New Orleans Saints.

Kenny Stills Is A Member Of