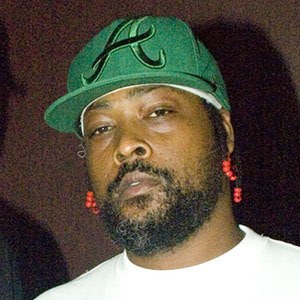 Member of the hip hop group Goodie Mob who has also been known by the name Khujo Goodie. He was also one-half of a hip hop duo called The Lumberjacks. He released a debut solo album called The Man Not the Dawg in 2002.

The first album he put out with Goodie Mob was 1995's Soul Food.

He was the only featured guest to appear on every OutKast album. He released a book called Straight out the A which was about his life and the development of the Dirty South movement.

He was born Willie Edward Knighton Jr. in Atlanta, Georgia. A car crash resulted in him having his right leg, below the knee, amputated.

He would perform alongside CeeLo Green in Goodie Mob.

Khujo Is A Member Of