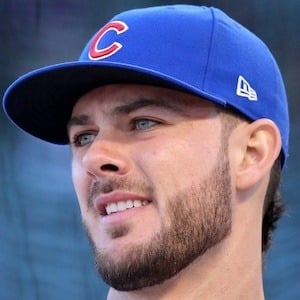 Third baseman who was drafted by the Chicago Cubs with the second overall pick in the 2013 MLB Draft. In 2016, he was named NL MVP and he helped the Cubs win the franchise's first World Series title in over 100 years. He was traded to the San Francisco Giants in 2021.

He attended Bonanza High School in Las Vegas, Nevada, where he posted a .418 batting average. He was a star at the University of San Diego, where he was named Co-Player of the Year in 2011.

In 2013, he won the Dick Howser Trophy and Golden Spikes Award as the best non-professional baseball player in the country. He was named NL Rookie of the Year in 2015.

He married his high school sweetheart Jessica Delp on January 7, 2017. They welcomed a son named Kyler on April 7, 2020. His father, Mike, played in the minor league system of the Boston Red Sox.

He became teammates with Anthony Rizzo on the Cubs.

Kris Bryant Is A Member Of