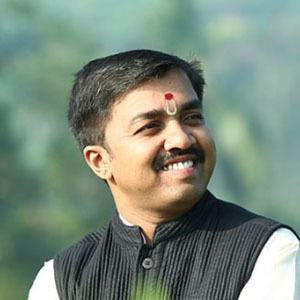 Indian music composer, Carnatic music vocalist, and producer who is best recognized for having composed the music for the Switzerland-based film Madly in Love. He is also recognized for having created the spiritual musical series Vande Guru Paramparaam which he shares through Youtube for his over 1.4 million subscribers.

He attended BPC College Piravom in Kochi where he majored in Computer Applications and Sound Engineering. While he was taught piano, violin, and mridangam, he taught himself the harmonium and flute.

He has won several honors and awards for his music including the DK Pattammal award of excellence from Karthik as well as the Yuvakalabharathi award from Bharath Kalachar in 2007.

He was born and raised in Thammanam, Kochin, Kerala, India. He has a younger sister.

Other music composers also from India known for creating music for different feature films include Ilaiyaraaja and Nakash Aziz.

Kuldeep Pai Is A Member Of