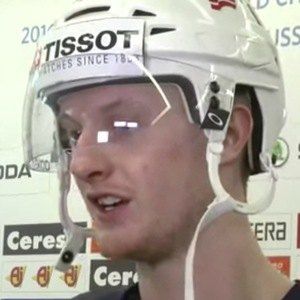 Professional ice hockey left winger who was taken 17th overall by the Winnipeg Jets in the 2015 NHL Draft. He spent a year at the University of Michigan before signing with the team.

He grew up playing for the Youngstown Phantoms of the USHL and was named the league's Player of the Year in 2015, when he scored 80 points in 56 games.

He was stellar during his one year at Michigan, earning Big Ten Player of the Year and NCAA Freshman of the Year honors.

He was born to Kathy and Joe Connor.

He and Jack Eichel were both taken in the first round of the 2015 draft.

Kyle Connor Is A Member Of