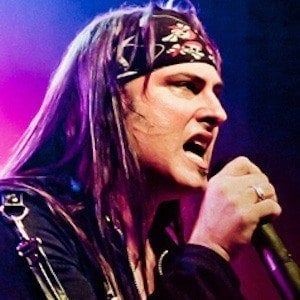 Power metal vocalist and the founder of Nightmare Records. He performed with such bands as Balance of Power, Pyramaze, Defyance, and Shining Star.

He began his career as a musician in the early 1980s.

He was involved in an organization called NOT FOR SALE, which sought to increase public awareness of human trafficking.

He settled with his wife and two children in the Minneapolis-Saint Paul, Minnesota area.

Bruce Dickinson and many others assisted King in the writing and recording of the A Moment in Chiros album, which was completed in three months.

Lance Thomas King Is A Member Of