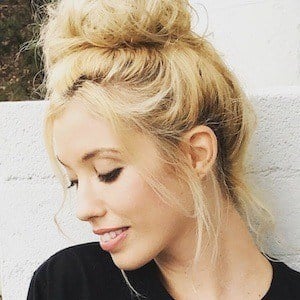 Comedian who has gone viral with her short skits created through Facebook and Instagram. She has a number of original characters in her videos, including Pamela Pumpkin, IVY and Laura Flirts. She has over 7 million Facebook followers and more than 3 million followers on Instagram. She also began her own family-centric apparel company called BOIBS, the idea of which came from an experience with a woman who scolded her for breastfeeding her child.

She acted in a number of short films in the late 2000s, called Stranded, The Hitchhiking Game and How Deep Is the Ocean.

She was hired by Russell Simmons' ADD Network to be a writer and producer of comedy shorts. She has acted in television series called Disaster Date, 'Til Death and Hungry. Several of her videos have gone viral on YouTube, including "Me Trying To Flirt (Part 1)," which has earned over 1.5 million views. She published the "Idiot" collection of essays, available for purchase on Amazon.

Her husband Stephen Hilton, a composer and music producer, often appears in her video series "Me Trying to Flirt." In November 2018, she revealed she was pregnant via YouTube, and her baby was born in 2019. They welcomed a daughter named Penelope Marilyn Hilton in March 2021.

She was hired to create content for Kevin Hart's LOL Network.

Laura Clery Is A Member Of